Usual stuff for Viktor Orban „cracking down on the media, curbing the independence of the judiciary, attacks on minorities and a drift toward one-party rule” is to create tensions in the US-Hungary relationship, the Washington Post writes.
Since 2010, US is sending more and more messages that Orban’s style to push Hungary into etreme nationalism is not welcomed into Washington . On the other side, the Hungary ’s primeminister seems not to understand any message…
Details: http://www.washingtonpost.com/politics/hungarys-viktor-orban-has-no-appetite-for-democracy/2011/10/11/gIQAfIJaiL_story.html

July 2010
The Washington Post about Hungary's leader habit to embrace 1930s-style nationalism and anti-Semitism.
The Washington Post is publishing an article about „Orban's habit of catering to Hungary 's extreme right, which still embraces 1930s-style nationalism and anti-Semitism”.
The extreme measures agains media, minorities and the bad realtion with the neighbouring countries in made Viktor Orban a persona non grata in Washington last time he served as Hungary 's prime minister. Now he is doing it again…
Details: http://www.washingtonpost.com/wp-dyn/content/article/2010/07/18/AR2010071802529.html
la 12:49 Niciun comentariu: Transnistria is geographically delimited by the 800 km bank of Nistru (Dniester), the 600 km bank of Bug and the 150 km seaside of Back Sea.

The region is also known in English as “Trans-Dniestr” or “Transdniestria”. Etymologically, these names are adaptations of the Romanian name of the region, "Transnistria" meaning "beyond the river Nistru".

Antiquity and Middle AgesThe area where Transnistria is now located has been inhabited by Indo-European tribes for millennia, being a borderland between Dacia and Scythia . The Tyragetae (Tyragetae meaning the Getae -or Dacians- from the Tyras -or Nistru-) inhabited the area around the Nistru river (called "Tyras" in ancient documents), as well as the Scythians.

The mix of Romans and Dacians (Getae) after the Roman conquest of Dacia made a Romanized population that evolved into the Romanian nation. The Romaninas lived in the Medieval Eve in mainly 3 Romanian countries: Wallachia, Moldova and Transilvania until they all united to form what is now Romania.

So, the Vlachs (Volohs, Vlasi, Vlachians etc) Moldovans and Transilvanians they were all the same nation, Romanians, speaking the same language, Romanian.

After the Roman conquest of Dacia (101-102, 105-106), the Daco-Romanized population that later formed the Romanian Nation inhabited those lands.

Early Germanic and Mongolic tribes were present in the area during their invasions of the Roman Empire.

The beginnings of the Eastern branch of Romanians can be found in the symbiosis of the Tyragetae, so the subjects of Dacian king Burebista (82 -44 BC) that at Bug mouths was ruling Olbia and the Romans whose presence can be recognized every step.

For ages between Romanians (Moldovans, Volohs etc), and Ruthenians or Ukrainians a complex ethnographic and demographic mixing process evolved. 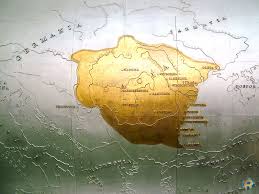 The Ukrainian historian V.B.Antonovici wrote in 1885 that neither the right bank nor the left bank of Nistru ,,ever belonged to halician principes or other Russian principes”.

Even from the beginning of the II-nd millennium those Romanization was very powerful, Scandinavian sources signalling the presence of the “blakumenilor” between Nistru and Bug and an old Russian chronic speak about the same ,,volohove” in the area.

At May 25, 1455, the citizens of Cetatea Albă (White Fortress - Akkerman), unhappy with the pirating actions of the Genovians from the castle Lerici from the mouths of Nipru, take under control this fortress and send the captives to the Moldovan ruler Petru Aron.

The Lerici fortress was under Moldovan control between 1455 and 1475. Nicolae Iorga shows that Podolia from the time of the Moldovan ruler Ştefan cel Mare (Stephan the Great) was “belonging to nobody” being alternatively under the control of Tatars, the Grand Ducat of Lithuania and Poland.

Ştefan Bathory in a letter to the Ottomans show that the lands between Nipru and Bug are inhabited by a mixed population composed by poles, moscals and Romanians.

In 1574, Ion Vodă Armeanul was mentioning ,,our country Moldova beyond Nistru”, while in 1602 the boyars are talking about their relatives beyond Nistru.

In the year 1681 Gheorghe Duca Voda becomes ruler ,,Despot of Moldova and Ukraine ”, as he was simultaneously “Prince” of Moldavia and “Hetman” of Ukraine where in this period, the writing and the papers are in Romanian. If until him mainly the ethnic border was after Nistru, Duca puts also the politic border over Nistru, ruling a territory between Carpathians and Nipru.

Other Moldavian princes who held control of the territory in 17th and 18th centuries were Ştefan Movilă, Dimitrie Cantacuzino and Mihai Racoviţă.

From the 15th century, northern Transnistria (current districts of Camenca and Rîbniţa) belonged to the Grand Duchy of Lithuania, and later to the Polish–Lithuanian Commonwealth (1569–1793), which encouraged the migration of peasants into the territory from the neighboring populated areas (from north and from west).

The localities Dubăsari, Raşcov, Vasilcău, as well as four other currently in Ukraine are mentioned in 17th-18th centuries as fairs for the Dniester-Bug region. In 1769 a document dated at Bendery mentions the then title of the Mitropolitan of Moldavia as Mitropolitan of Proilavia, of Tamarova, of Hotin and of all the borders of the Danube, of the Dniester, and the Han's Ukraine, the latter being a common reference to the then sparsely populated Dniester-Southern Bug-Dniepr area.

Before becoming part of the Russian Empire in 1792 (southern part) and 1793 (northern part), the largest groups living between the Dniester and the Bug rivers were Moldavian (Romanian), Ruthenian (Ukrainian), and Tatar peasants. The Russian census of 1793 of the Ochakov region (southern part of the Dniester-Bug area) mentions a totality of 67 villages, of which 49 are mentioned as Moldavian (Romanian) and 18 as Tatar. The first candidate for the governor of the new Russian region was the Moldavian boyar Alexandru I. Mavrocordat. The northern part of Transnistria had Ruthenian (Ukrainian) and Moldavian villages.